Innovation in IBM and its impact on its business practices is the subject matter of this case study. It attempts to explain why innovation is now an integral part of most firms with an emphasis on the innovation practices now in place in IBM and the trend towards open source development and how it’s changing the face of the software industry. IBM’s attempt to bring researchers in touch with client needs via their On Demand Innovation Services (ODIS) division is also explored.

IBM is a information technology company that focuses on four broad market segments technology, software, services and hardware. It is among the Fortune 100 companies and its dominance in the IT industry is rivaled perhaps only by Microsoft. Unlike Microsoft, IBM has a rich tradition and attracts the best talent in the industry without parallel. IBM over the past 2 decades has evolved from being mostly a mainframe and mini-frame based company and has moved towards providing services to their clients. Mainframe and minis still form a core part of their business but the services sector has grown exponentially. Lou Gerstner. Jr. is credited with this dramatic turnaround of a slothful giant that is now nimble enough to prance with the hares. The elephant now roller-blades!

A more recent phenomenon in the IT industry is the trend towards use of open source software for commercial applications. The use of open source has driven down costs, led to much quicker implementations and improved productivity. IBM has been at the forefront of this revolution by providing maintenance and support to LINUX deployments and its adaptation of the Eclipse platform as the de facto base for its Integrated Development Environments especially its core server side development product WebSphere Studio Application Developer (WSAD).

IBM Research has always been at the forefront of inventive technologies and has the most no. of patents credited to any company in the US. This is also a major revenue earner for IBM by the licensing of these patents to other firms.

Use of innovation models, metrics within IBM divisions

ODIS Researchers first study a client’s problem and then work with BCS consultants to devise a tailored solution. First, existing research skills , assets and patents are examined to see whether those can be retrofitted to the client problem, rather than reinvent the wheel. If an answer is found, then the existing process, technology is applied to the client problem and licensed to them. If not, then resources are allocated to develop a new technology/solution and the solution is built from scratch. ODIS thus transforms IBM into an Innovation Network Service Provider. ODIS gets scientists out of the labs to help IBM’s clients solve their toughest problems.

IBM’s move towards to the Open Source Business Model was a natural culmination of their enterprise move towards Open Innovation. Besides their LINUX service support offered, it also threw open their Eclipse project in November 2001. Eclipse is now a phenomenon, with over 800 tools built on this Integrated Development Environment (IDE) framework. Other open source initiatives include the Apache HTTP Server as an integral part of its Web Application Server (WAS) product line. The Open Source process allows IBM to work with a dedicated community of developers across the word, allow them to concentrate on adding value and providing integration services to firms that intend to incorporate open source products in their IT processes. This has also aided them to lower costs and allow their R&D divisions to concentrate their funds and resources more efficiently in a few concentrated areas. This mirrors the model followed by the ODIS division, an essential part of the Open Innovation process at work.

Of the 4 business models available to firms using Open Source, IBM has used a mix of loss leader initiative (the Eclipse project), cannibalization of an existing product by selling maintenance and support (LINUX initiative) and adding value to the open source products (products like WSAD).

The provision of LINUX support and maintenance as a service provided by IBM professionals, was a major breakthrough for the proponents of LINUX as the operating system of choice for server side deployment over the other UNIX variants and Windows NT and Windows Server 2000. Though this would eat into IBM’s own Unix variant AIX’s market share, it made profound commercial sense for IBM to go down this route as server side deployment on LINUX had started acquiring critical mass. This also fit into IBM’s move towards services as a way of adding value to their product offerings and an increasing demand from customers for this service, in addition to the support services provided for their products.

The diagram listed below describes the process that would be followed as part of an idea screening before the decision to provide LINUX support & maintenance as a service offering was launched.

Does it fit the organization?

Yes, IBM is an IT services provider. This is an extension to current service offerings

Does it provide strategic advantage?

Yes, our server side products have LINUX code-bases. Providing LINUX support allows us to capture a major market, with no real competition except from pure LINUX packagers such as RedHat and Mandrake.

Is there a demand for it?

Yes, our current and prospective customers have expressed a desire for this offering.

Is there a clear definition of success?

Increased sales on the LINUX platform for our software products.

Will management support it?

Yes, since this fits into the move towards services as a major revenue earner. 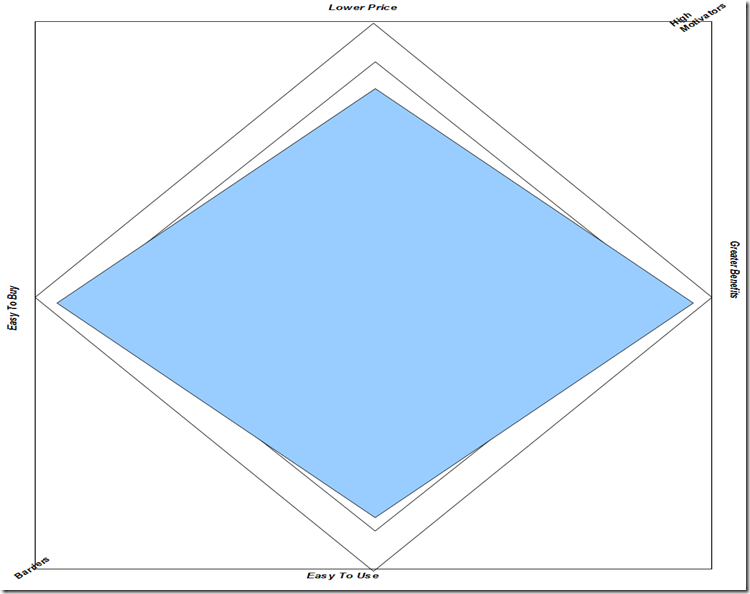 At the enterprise level, IBM describes 3 types of innovation:

Products/Services/Markets are sources of revenue and thus a direct metric measurement is profit.

Operational innovation also can be measured by profit but this attacks the cost side of the profit equation. This allows the firm to capture market share via lower costs.

Business Model innovation changes the game by using creativity to lower costs, target new markets, lower prices or all of the above.

IBM has focused on business model innovation in the recent past by remixing their product portfolio. Movement to the high-value innovator spaces in technology and services has resulted in a more balanced profit sources, one third from services, another from software and the third from systems and technology. IBM’s next move is towards increasing globalization producing innovation collaboration across the globe by setting up research centers in different countries.

Innovation drivers can be classified as follows:

IBM CEO Sam Palsimano believes that increasing competitiveness and the increasing commoditization of things, makes it a challenge for firms to retain their existing business models. The dynamic changes coupled with changing technology and the increasing globalization of competitors pose a threat to the existing market leaders. At the same time, these changes also throw up opportunities to be exploited.

Funding a new innovation could lead to reduced funding for an existing program or product.

The problems encountered include how much can be accomplished w/o money? Is money needed? What are the avenues? When and how much? Can we identify partners? What’s the ownership break-up?

Some solutions include calling in favors owed, use milestones, list out possible money sources, use good enough substitutes , assess the innovation for potential interested partners to be contacted.

A clear-eyed view of risks balanced against benefits can create an environment where innovation is nurtured rather than killed. How do we measure risks and benefits? What are the appropriate measures for innovations? What are the risks of not innovating? Can we measure the benefits?

Some solutions are to learn about and promote effective risk assessment methods, identify the right person/organization for risk assumption, find and develop supporters, anticipate objections and clarify, use prototypes, use a portfolio approach, reassure people with reasons, take the safety of sponsors, participants and other stakeholders seriously.

Innovations tend to cross boundaries and create new categories. Hence innovations might get killed by organizations if stakeholders feel threatened. Solutions include taking concerned stakeholders into confidence, emphasizing the benefits, and sometimes avoiding losing stakeholders until the innovation gains enough winning leverage within the company.

Time is scarce. If the value of an innovation can be increased, then time can be freed up to meet its demands. Questions to be asked are is the innovation worth our time? How much time? What time horizons do we have? Are our competitors ahead? Do we have flexibility? Some answers include delegating work or outsourcing, have small success milestones to encourage participants to invest more time.

Most innovations cannot be measured by the usual ROI measure. Some innovations can lead to increased sales in a hitherto untapped segment e.g. LINUX support has helped IBM to capture a major chunk of the UNIX server product market. Are there other measures of success? Is this innovation a long-term revenue earner?

What is IBM’s winning innovation formula?

IBM follows a mix of practices, using both Open Innovation as in the case of Eclipse and LINUX, as well as leveraging its existing patents which is a product of traditional R & D (ODIS). These may be based on standards and/or outside research.

IBM believes that it can achieve more productivity and growth and move up the value chain by collaborating with companies, governments and educational institutes. Diversity is an integral part of IBM culture and thus different views of opportunity and technology are constantly evaluated for value addition to existing businesses.

For example, the breakthrough that IBM got done in the Cell processor, which is based on their Power architecture, would not have happened if IBM hadn’t designed chips for Sony (SNE ), Toshiba (TOSBF ), Microsoft (MSFT ), and Nintendo (NTDOY ). Now Toshiba and Microsoft are competitors of IBM but this collaboration drove a great breakthrough. In the software segment, collaboration with the open source community such as Linux and Eclipse has driven software development to standardization , increasing ease of use.

IBM is one of the rarities in the business world, that has fallen from the pinnacle of the industry, hit near rock-bottom and then dramatically turned itself around to climb the summit again. The targeting of the internet as a new revenue model, the open source business model, licensing patents to smaller start-ups are some of the innovative business methods used by IBM to achieve this turnaround. Innovation was thus an integral part of the strategy employed by IBM to regain its pole position in the IT industry.

The IBM Research paper states the following about the lessons gleaned about how to retain innovation:

Ensure a variety of thinking within a critical mass.

4> Innovation: The View From The Top – IBM’s honcho on what CEOs can do to lay the groundwork for real breakthroughs – Business Week April 3, 2006

This is the text of an assignment on Entrepreneurship & Innovation for my MBA at CIIM.